Stalin has died; Khrushchev has brought thaw, “live has become merrier”. Expecting for better life, generation of Ukrainian intelligents begins an active struggle for the right for their culture existence. A rebellious temper, drastic changes of life conception, freedom of preconceptions and archaic canons describe the sixtieth. On the west the youth struggled for sexual revolution, women turned into feminists, the moonfall , the science went ahead rapidly and everyone learned to dance twist.

In USSR, especially at the territory of modern Ukraine, the phenomenon had its own peculiarity: Soviet intellectuals were possessed by the idea of Ukrainian language and culture revival, to edge out russification, to save its national identity. 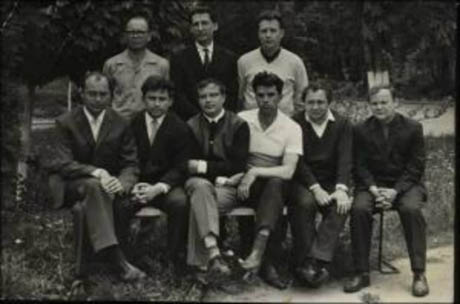 Inspired by ideas of humanism ( the human is the biggest value, cult of mind, free expression of it’s ideas, right on happy life), carried their knowledge and conception of “good” and “bad” to the Ukrainian ground and opposed in their works the dominate totalitarian regime, fought for universal and national ideals, defended patriotism and democratism…

They organized illegal literary soiree, evenings of creativity, exhibitions and showings, the phenomena of self publishing – secret clandestine activity, publishing of creative products, which was uncontrolled by censor. There is no doubt, that the resistance movement was a threat to the totalitarian ideology of the regime, that’s why the activists of 60-ies were persecuted, arrested, they were not allowed to publish their works. The sixtiers museum in Kyiv was opened not long ago – in August, 2012. It is located on 33, Oles Honchar street. The exposition is located in three rooms and counts near 20 thousands of items which include: manuscripts, pictures, photos, letters, and personal belongings of sixtiers. The museum was created in order to acquaint people with activity of sixtiers, to show the importance of this period in the history of Ukraine.