War to hostels, peace to hotels. How Ukrainian lawmakers can scare away foreign tourists.

A bill No. 6424 "On Amendments to the Housing Code of the Ukrainian SSR", submitted on May 3 for the consideration of parliament, perfectly shows the attitude, at least of a part of the elite of the country, to the small and medium-sized businesses. Instead of the possibility to legalize the offices and hostels located in the apartments, the document suggests imposing huge fines on their owners. Which, of course, everywhere will be replaced by bribes. 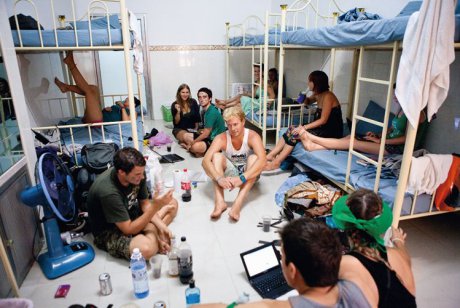 What’s terrible about a hostel or a small office on one of the floors of blocks of flats? For the residents of neighboring apartments - nothing. In any case, there are fewer problems from such neighbors than from an adept of exercises with a perforator on Sunday mornings. Yes, and the example of European cities, where hostels, small offices, legal offices or medical offices in a multi-storey building – is the routine thing, which shows that there is nothing wrong in this phenomenon there.

But municipal officials and the police dream such objects in the nightmares. Although their owners have not officially received permission to change the purpose of their apartments and it’s easier than ever to find violations of the Housing Code in their activities, you can not tax enterpreneurs. Adopted in the distant 1983, the Housing Code forbids dealing in residential apartments only with industrial production. The other cases of entrepreneurial activity are not specified directly. Therefore, the owners of such apartments can maximum be held responsible for the abstract "violation of the rules for the use of residential buildings." And this is from two to seven non-taxable minimums, that is 34-119 UAH. Some tears, in general.

The bill, they submitted, directly prohibits the placement of offices and hotels in the blocks of flats. Justifying the need for such a ban, the authors of the project appeal to the fact that the conversion of flats takes place without taking into consideration the norms of fire safety, and daily visits to such places by a large number of people lead to increased loads on elevators.

It is worth noting that, for example, in Rome or Budapest, hostels in houses with old, built in the beginning of the last century, lifts can be found on any of the central streets. And there’s nothing wrong with the elevators. As well as there are no fires because of the offices. Lawyers and psychoanalysts do not quit their jobs, forgetting to turn off the iron, and do not fall asleep in their waiting room with a burning cigarette in their hands. But these are trifles.

More important is another. People’s Deputy did not embarrass that the Committee on Regulatory Policy and Entrepreneurship in 2007 had already considered the issue and concluded that if the owners of the converted apartments do not damage the environment and do not violate the rights of neighbors, they can use their property for business. And if it so, then all that needs to be done is to facilitate the procedure for changing the purpose of the apartments so that the entrepreneur can legally equip a hostel or office in it without going through 12 circles of bureaucratic hell. It is obvious that the legal hostel will regularly pay the tourist tax, which now its owner puts in his own pocket, and from the office owner it is possible to take on the renovation of the porch more than from the usual tenant. But there is nothing said about all this in the draft law.

Instead, the authors of the initiative propose to punish violators by a fine of 2 thousand to 5 thousand non-taxable minimums, that is, in the amount of 34-85 thousand UAH. Well, the amount is quite serious, to agree with the inspector "amicably" and pay only a part of it in the form of a bribe.

Especially strange all this looks taking into consideration the efforts of the state aimed at the development of tourism. European tourists, if they go to have fun in the belligerent country, it is only because of its cheapness. Insiders of the tourism industry have been complaining for several years that one of the main factors hampering inbound tourism is the excessive appetites of Ukrainian hoteliers. And if instead of developing a segment of budget housing, we will begin to destroy hostels, then it is unclear why it was necessary to spend 30 million euros for holding Eurovision?

However, so far it is only a question of the draft law submitted to the Verkhovna Rada. To become a law, it has a long way to go. And I want to believe that on this path common sense will defeat the flawed logic of "taking everything and banning everything."